This post has come about as a result of my own laziness (or rather ‘efficiency’ – given that I’m now writing this post I’m not sure I am *that* lazy). Anyhow, last week I was searching Twitter to see if anyone had made a list of people/charities who tweet on a particular topic I was researching. Why go to the trouble of creating a list myself if I could subscribe to one that already exists?

However, despite having been around for years I was surprised to see how few of my go-to accounts were using lists. I am a big fan of lists, generally; my lists even have their own (sub)lists. Twitter lists save me masses of time and help me to find relevant information really quickly. If you follow more than a few hundred accounts I don’t know how you sort the important updates from the rest of the content that’s being shared. Have you not worn your scrolling-thumb out?

In the interest of saving you from RSI and helping to you get to the good stuff more quickly, here’s a simple run-down on Twitter lists:

How lists are going to help you

In short Twitter lists help you to organise the people you follow. You can group them together by topic, location, profession and so on, and then see what they are talking about. In practical terms, if you’re a charity concerned with – for example – providing horticultural training and employment for people with disabilities, you might create lists such as:

Finding people who are working in your field or talking about topics you care about and creating lists around them mean you have a constant source of relevant information at your fingertips. This is hugely useful if you’re looking for content to share on social media. Lists can be public and therefore widely visible, or private and only visible to the person who created them.

Lists can be found on your profile page. If you’re using a computer you will see ‘Lists’ just below your header picture alongside ‘Likes’. On your phone you’ll need to hit the ‘Settings’ cog, which brings up a menu from where you can select ‘View lists’. In both cases you will see two options: ‘Subscribed to’ and ‘Member of’.

You might find you’re already a member of a list. People have added me to all sorts, including charities, social media, female freelancers and foodies because these are some of the topics I tweet about. If you don’t use lists there won’t be anything in the ‘Subscribed to’ area so let’s put that right.

Getting started: Using other people’s lists

As my search for existing lists was what prompted this post, I’ll start with how you can use other people’s creations.

Pick someone you follow and visit their profile page. By clicking on the ‘Settings’ cog and selecting ‘View lists’ you will be able to see any of the public lists they have created or subscribe to, as well as the lists they have been added to. Click on the title to open the list and you will be able to see tweets from members, who the members are and who subscribes to the list. If you like what you see, you can subscribe. Simple as that! This list will then appear in the ‘Subscribed to’ section of ‘Lists’ on your profile page.

Getting started: Setting up your own lists

Going back to our example of the horticultural charity, if you were running their Twitter account you may want to set up a list of garden centres in your local area. From your ‘Lists’ area, click ‘Create New List’ (on your phone this is a blue tick in the top right corner): 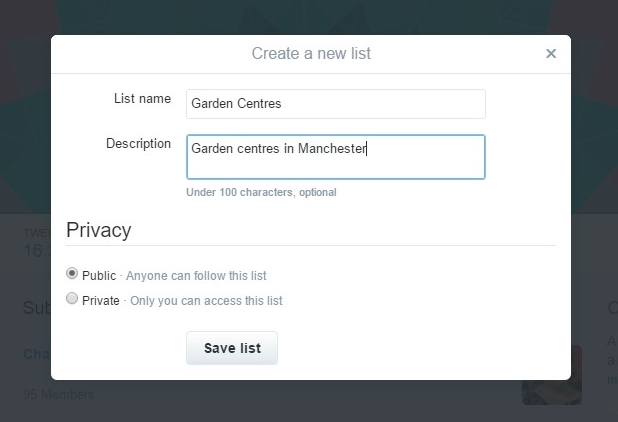 You can give your list a name and a description and, crucially, choose whether it is a public or private list. In this case our list will be public and therefore visible to anyone. Once you have saved the list, you can start adding people to it:

As you can see, you can either add accounts one by one by name or you can add them from your ‘Following’ page. If you choose to add people from your following page, just click the ‘Settings’ cog and select ‘Add or remove from lists’ and you can select which list you want to add them to: 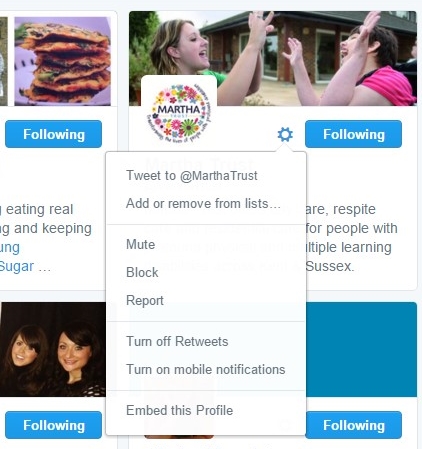 There are some important things to note about creating lists:

Once your lists are up and running you can add more people to them as you go along. Whether you’re on a computer or another device, the route to do this is via the ‘Settings’ cog on their profile page and selecting ‘Add/remove from lists’:

Open your list to edit the title and description or to delete it, and to remove people via the ‘Settings’ cog next to their name in your list.

Alongside your main timeline you can now scroll through what people on your individual lists are saying. Taking the Garden Centres list as an example, the tweets we see are only those from the group members: 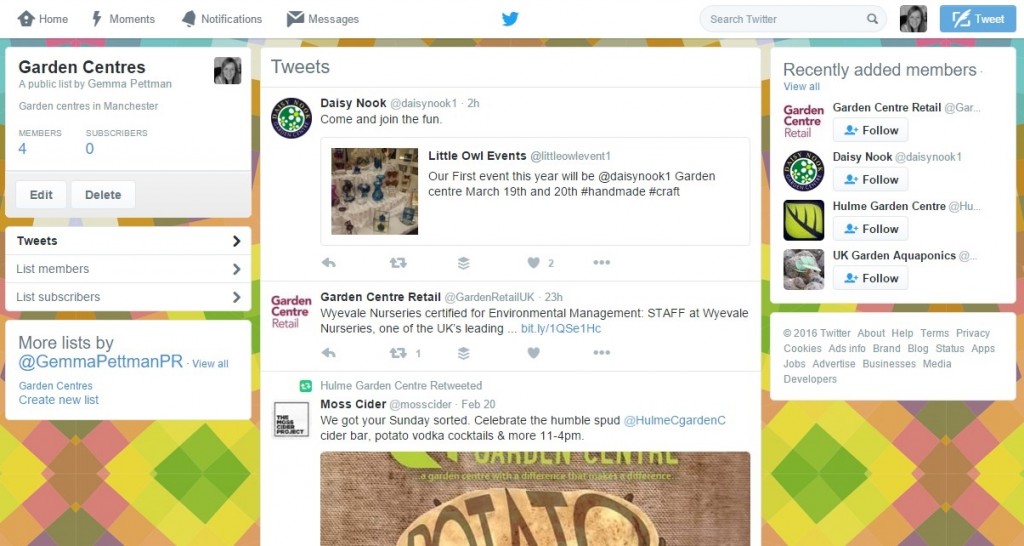 Hopefully that’s given you enough of an overview to get cracking. Pop ‘create Twitter lists’ on your to do list and let me know how you get on.